A few days ago, I got into a conversation on Facebook with a young woman who lives in Bo, Sierra Leone. I had been in Bo when I was in the country, and I told her I was glad things were better than they were during the terrible war years. She told me that she works with orphans and she sent this picture. That is her with the kids. 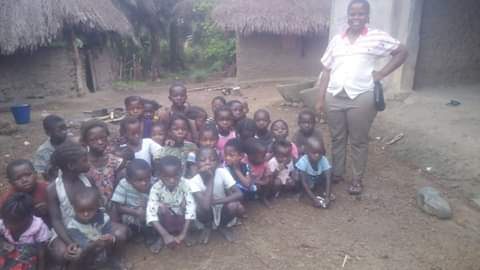 I told her that I wouldn’t be able to help financially at this time but that I would pray for them. She messaged back, “Ok because prayer can do everything.” I’ve found a lot of faith in Africans. They have certainly needed it!

I told her that I have a prayer list and the group would be on it. She told me about a little boy who is ill and needs extra prayers. His name is Joe. So he’s on my list too.

She added, very diplomatically I thought, “IF somebody out there wants to help us both financially and prayer, you let me know, we are hoping for that. So that we may have some Food stuff, use clothing, school materials, etc.” So if anyone who reads this does want to help, just contact me at my email listed on the contact page here.

Little did I know when I went there as a young woman that the connections would continue.