It’s a good thing I wrote in my journal obsessively when I was nineteen. If I hadn’t, how could I have written so much about my around-the-world trip? Surely not memory after over half a century! The book is called Around the World at Nineteen: Explorations and Romances and I’d better admit that every chapter has explorations of Europe and Asia but there were few chapters with romances. But hey, I WAS in love with Paris! So here are some selections.

I took a passenger liner from New York to Naples… 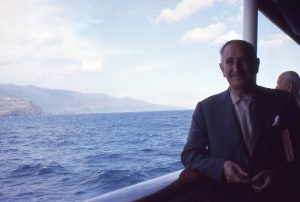 I was good at starting conversations. I would just ask a question. So I chatted with people of all nationalities and ages, mostly in English, and sometimes in French. My French didn’t usually go far before I bogged down. One evening I chatted in a combination of French and English with a cultured Spanish gentlemen. I had noticed him because he always had a book tucked under his arm or he was sitting in some peaceful spot reading.

He was on his way home from Cuba where he had gone to see about his property. Castro had confiscated it and wasn’t reimbursing him anything. He told me that I was very charming and intelligent and that if he was 20 instead of 63 he would marry me.

“You are wise,” he said. “Study well. Nobody can take away from you the knowledge you have, even if they can take your belongings.”

I traveled around Italy and France by myself for a while:

My first afternoon in Rome, I went to American Express to see if there was any mail for me. I was pleased to get a letter from my father outlining plans for me to stay with friends of his when I got to Paris. Then I started chatting with a Stanford Law School student who was going around the world. He and I wandered around some of the tourist sites of Rome, the Trevi fountain, the Victor Emmanuel II monument, the Capitoline hill. We walked around to the back of the hill into the most beautiful spot I’d been to so far on the trip, a nighttime view of the ruins of the Roman forum. I specially loved the look of the plants growing on the ruins.

We sat on a wall and looked at the ruins. In America, none of the buildings were old enough to give me such a sense of history. In Rome the time line was continuous for over two thousand years. It made my life span seem short and insignificant. Where my years happened to start and end didn’t seem to matter much. But that perspective didn’t stop me from enjoying a great pasta dinner.

The initial reason for my trip was to spend six months at the Stanford campus in France, fall and winter quarters. 1961-62. Stanford had a program designed for people who weren’t necessarily language majors. The campus was located in Tours, south of Paris, and the classes ran from Monday to Thursday so we would have long weekends for travel:

One November weekend I went to Paris with my roommate Kris and two other good friends, Tena and Carol, who were roommates. We four did a lot of things together. Sometimes we all took the train to Paris, but several of the guys in our group had purchased antique French cars. So on this Friday Kris and I got a ride up with Marc and Tim, while Tena and Carol came with Jeff. We four girls stayed in one room together in our favorite cheap hotel. Another of the Stanford guys, Wayne, turned out to be right down the hall.

The dollar was king. I had a guidebook called Europe on $5 a Day, and we felt extravagant if we spent that much per person for a room and meals. The hotels we favored had their primitive aspects: they had toilets down the hall from our rooms, and most of those consisted of two footpads rising up a few inches from where your pee or other stuff would collect. To flush, there was a chain you reached up and yanked, preferably as you leapt out of the W.C., short for Water Closet. Another feature of these tiny spaces was that the lights might suddenly go out if you lingered.

We stayed in the Latin Quarter, where cheap hotels and cafes abounded, near the famous Boulevard Saint Michel, known as Boul’ Mich’. As the area was full of students, there were also a lot of used bookstores. Mostly the books were in French, but some could be found in English. When it was cold, people would sometimes sit or lie on the sidewalk grills over the Métro, to warm up. I never did, but I would stand over the grills for a while. Paris could be bitterly cold.

I stayed over in Europe for the spring, and then in June I took a ship from Marseilles in the south of France to Hong Kong, where I met up with members of my family. Some of my wilder adventures happened during that journey, but here I’ll put in the story of the the night before I boarded the ship. I had trouble finding a hotel in Marseilles because there was about to be a referendum in Algeria about whether it should remain part of France. With everyone expecting that Algeria would vote for independence (as it did), the French were pouring into Marseilles to get away. Finally in the evening I found a possible place to stay…

I went in and the owners—a man and a woman—looked surprised when I asked if they had a room for one person for one night. “Mademoiselle, for you?” the woman asked in French. I said yes and commented that the upcoming referendum seemed to have created a shortage of  hotel rooms. I said I had been traveling all over France for many months and I had always found economical hotel rooms easily. The man complimented me on my French and asked how I happened to come to their place. I told them that Albertine had suggested it. They looked at each other and nodded.

“You know the kind of places you walked past, we’re not like that,” the woman assured me. “Our rooms are clean and secure. You will be safe here. But have you had your dinner?”

“Don’t go out,” she ordered me. “It’s getting late for an innocent like you to be out around here. We will make you a tray, if you don’t mind just having bread, cheese, wine, and fruit.”

I assured her that I ate like that all the time, and I thought to myself that looking young for my age had its advantages.

She led me up two flights of stairs and into a small room. It smelled faintly of the cleaning products that must have been used in its bathroom. She pulled back the coverlet and showed me that the sheets were clean. She opened the window for some fresh air and showed me how to latch it. Finally she showed me how to double-lock the door into the room, and I noticed that the door wasn’t flimsy. There were some art prints on the walls too. I’d stayed in worse rooms.

I went back downstairs with her and paid the reasonable fee. They gave me a tray with generous servings on it. So I settled in, refreshed by a shower, reflecting that this last night in Europe was very different from my first night, all those months ago in Naples. I actually felt more at ease now. I pulled one of my English language novels from London out of my tote bag and got engrossed in it.

Several times during the night, I was jolted awake by the sound of feet going up and down the stairs, past my well-locked door. After a moment of uneasiness each time, I decided I had landed in a high-end establishment, being so clean and the owners so nice. I didn’t think I would write my mother about this night. I didn’t want her to worry. But once I got home it would make a great story.