I can connect emotionally with my dogs and cats. It’s easy. We gaze into each other’s eyes, or the cat purrs, or the dogs sit at my feet. When I walk into the kitchen, eight canine feet usually pad along after me and four feline feet may come into the dining room so the cat can supervise.

When we raised llamas, they too were mammals and I could communicate with them, some more than others. Skittish Posey was the hardest, and charming Lil Bit was the easiest.

But ravens? They are not mammals and they are not domesticated animals. So I suspected at first that it was more in my imagination that I communicated with them. Several years ago we moved to a small mountain town in New Mexico, and the view from our front windows often includes ravens floating in the air above us, or flying fast when chased by the smaller birds who get annoyed by them. They all roost in a large tree by our house.

After we had been here a while, and I became more fascinated by them, I read a couple of books: Mind of the Raven: Investigations with Wolf-Birds, by Bernd Heinrich, and Gifts of the Crow: How Perception, Emotion, and Thought Allow Smart Birds to Behave Like Humans, by John Marzluff and Tony Angell. My mind was blown by how much like us the corvids (ravens, crows, magpies, and jays) are. I’d had no idea. Then I found a blog written by a woman scholar who uses the handle of corvidresearch. She doesn’t write all that often but it’s full of information. Here’s a post of hers about telling ravens and crows apart. 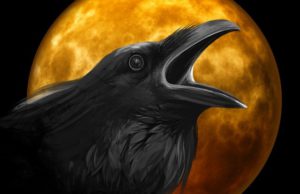 I began imagining a novel I might write, about the communication between a gray-haired woman (based on me) and a local raven (based on one of the ones I often see). I never got too far with it because my father, who wrote science fiction as Cordwainer Smith, seemed to have the edge on imaginative writing in our family.

But now and then, I wonder what that raven and I would have to say to one another. Would they be as surprised as I am at how similar our emotions are? Maybe someday I will find out.