You want to write your memoirs? Great! It can be a very satisfying project. One of the first things to decide is how you are going to publish them, as that will shape many details of creation. There are essentially three approaches to publishing your book: very simply, like for family members; self-publishing, as I have done for many years: and traditional publishing, which will require that you start by finding an agent. 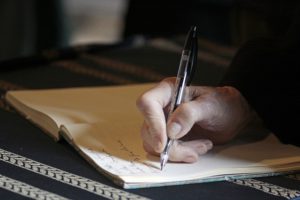 [1] Memoirs for Family and Friends

If you are writing solely for family and friends, you can use the very simplest methods of publishing. This could be handwritten pages (if your handwriting is better than mine). You can make a few sets by having copies made. That’s extremely minimal but you can at least get something done. A lot of people think about writing memoirs but don’t ever get started, so by doing this you would be ahead of the crowd.

A more fruitful method would be to type on a computer. This has the advantage that you can rearrange or add things. Suppose you are writing chronologically and have finished writing about your childhood but you suddenly remember that time in fifth grade when you hit a home run with the bases loaded. On a computer, it’s easy to insert that story among your other fifth-grade tales. (I hope you don’t have one that I do from that year, about how half of my elementary school burned down one night. Come to think of it, was that fourth grade? If I can’t figure it by googling or from my notes, I wouldn’t dither about when it was in my memoirs, as the exact date is not that important to my story.)

Back to this simple method.  You can insert photos by making copies of any legible photos you have. Scanning them in and then using photo editing software like Photoshop or the one I often use, its simpler cousin Photoshop Elements, gives you countless choices. I once spent many happy hours making photo collages of family members. A free online photo program I haven’t used but many people have is called Canva. Once you have some photos, you can pick a simple method to include them.

When a cousin came to visit me a few years ago, we looked through my physical childhood photos and selected about twenty. I scanned them onto my laptop, using my printer which is also a scanner/copier. Then I made a PDF with patterned green background on the pages and the photos at slight angles. It was easy to email it to our other cousins. Here is one 1950s photo from that little project. 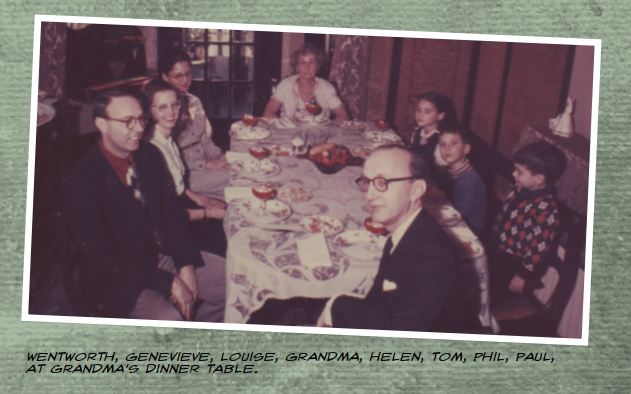 My husband quite often makes short hard-cover photo books for birthday or holiday gifts. He does this at a website called Shutterfly. He got on their mailing list and he watches for their frequently-offered bargains. It’s amazingly reasonable even for one or a few copies.

I self-published my first book Living with Llamas back in 1985, under the publishing company name Hartworks which my husband and I continue to use.  The first book did well and as a result, every book I have written since then has been self-published. Some have done better than others in terms of outreach and income, which reflects two things: that I am better at writing books than at promoting them and that some topics had an intrinsically broader interest than others.

To be successful at self-publishing, you need to develop a variety of skills:

You need to be a self-starter or at least have a close friend or family member who checks up on you from time to time. The stronger your motivation, the more likely you are to keep going. If you are a good writer, so much the better but if you aren’t all that great, you could hire an editor.

You really should have a computer or at least a tablet that you can write on. While some authors have written books on public library computers, it’s best to have your own so you can write at any time.

There are many writing programs you could use. I’ve used MS Word and its free clone LibreOffice, but now I write in a program called Scrivener. It’s great for organizing. Clicking on the image takes you to its website, in a new tab.

Some people prefer to use dictation software, such as Dragon Naturally Speaking. Recently, when I hurt one of my thumbs while playing with my dog, I thought I might need to dictate but I’m getting along fine with typing. Still, some people absolutely swear by dictation.

Proofreading will inevitably catch errors. I do my first-pass proofreading by myself, and I have found that reading aloud is a great way to catch things like using the great word great three times in a sentence, as I just did here. I normally move on to formatting after this because once the book is formatted, I have several writer friends (including my husband) who will give the book an eagle eye examination. They catch most things.  I typically give them a PDF version. You can also hire a proofreader.

To format a memoir, I use a special program which does a really good job for both physical books and electronic formats. It’s called Vellum. It’s only available for Mac computers, and I’ve kept an old Mac I rarely use for anything else, just for formatting my books. That website explains it. I like the choices I have for inserting my photographs. Also, if I think of a way I want to edit a paragraph once I’m in Vellum, it’s easy to do. Here is an example showing a page from my memoir about spending the summer of 1963 on a work camp in Sierra Leone, West Africa. I could center the photo or put it on the other side while in Vellum. I could add captions or a different border. Fun! 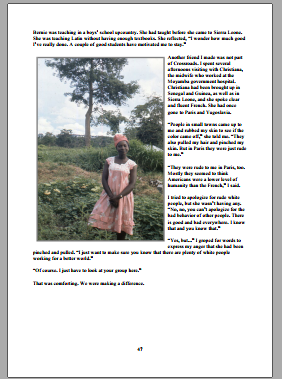 If you don’t have a Mac there are other programs you could use. MS Word can do quite a lot of formatting.

Once you have had some advance readers read it, you will need to make whatever corrections they come up with, providing you agree with their thoughts, of course! One friend I have used as an advanced reader says I don’t use nearly enough commas. I have to evaluate where I want to follow her ideas and where I don’t.

This involves quite a few steps.  I think I will do another blog post about it. Once I do, I’ll link to it here.

I do admit to being biased against going this route because I have been self-publishing for so many decades that I don’t have an inclination to go traditional. Some writers feel that they haven’t been REALLY published unless it’s traditional. It’s certainly true that with the growth of self-publishing a lot of mediocre, badly edited books are out there, but since I know mine are well done I don’t worry about that.

Which Approach Will You Use for Your Memoirs?

If you read books or websites about creating memoirs, some of them will assume you are going to take one of these three routes. They may not even mention the other ways. For example, a book about writing and selling a memoir may assume you will use a traditional publisher. One about writing your life story may assume it is for your children. When I get around to reviewing books and sites on this general topic, I will make it clear what approach any given book or website is taking.

You can start working on your memoirs without deciding the approach, but after a while it will come up. I hope these ideas will help you decide how to write your memoirs.

15 thoughts on “Write Your Memoirs… First, Decide How to Publish”